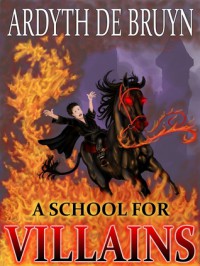 This was a fun sort of retelling of Harry Potter.

Except it's for 'Slytherines' only!  Sot hey can learn to be evil villains.

Although a 'Gryffindor' has managed to infiltrate the school.

Because he doesn't want to be a hero, he wants to be a villain.

An almost direct scene involves a troll being set loose in the history dept.

I laughed out loud.

However, I really want to know what's up with Igor.

We encounter him once and he's intriguing, but he never shows up again.